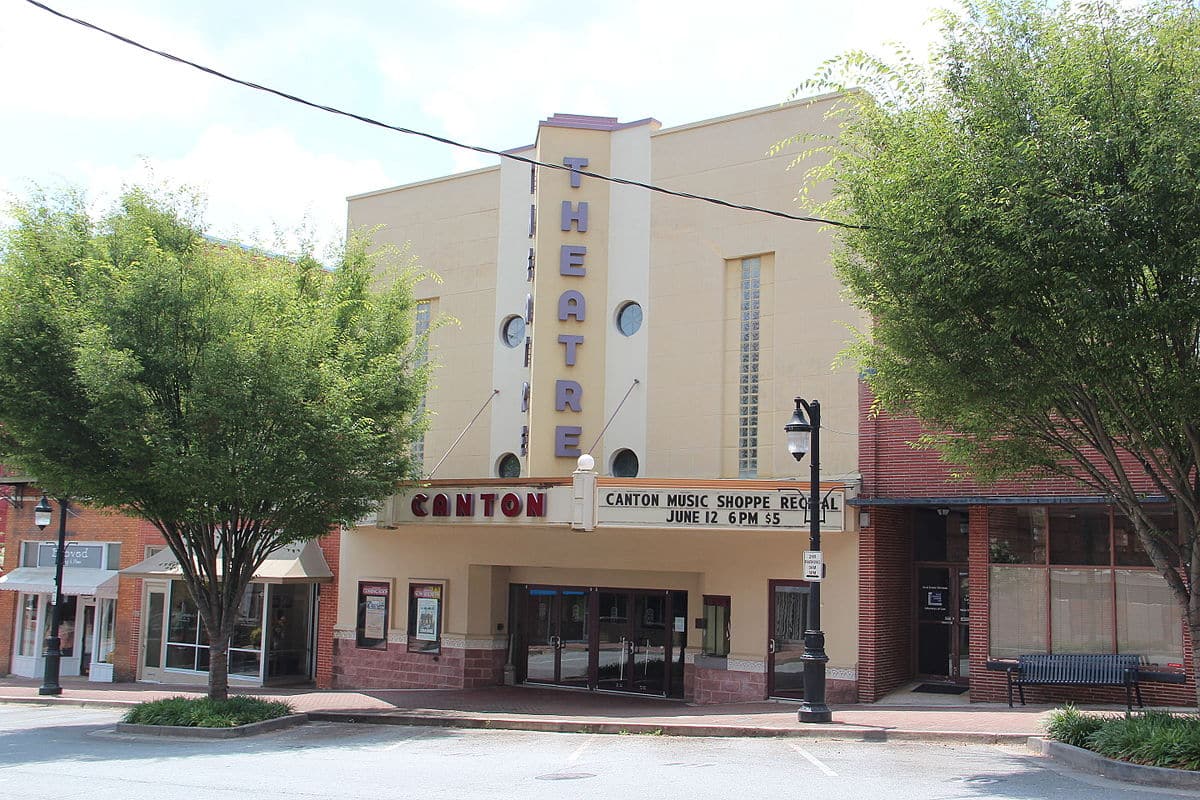 For over 100 years, the Historic Canton Theatre has been a shining star for entertainment in the Canton community. As early as 1911, the Theatre was used to show slides and silent movies. Later, in the early 1920’s, the Theatre changed owners and was renamed “The Bonita”, which held movie showings on Fridays and Saturdays.

During this era, the popularity of the Theatre grew rapidly. The Theatre was soon renovated, expanded and renamed  “The Haven”. It presented the people of Canton first line shows, including their first talking motion picture, the 1928 film “Singing Fool”, starring famous singing star Al Jolson.

The “Haven” continued to be a movie house for several more years until the late 1930’s, when the Theatre was sold to the Martin-Thompson Theatre Company. The newly named “Canton Theatre” was then remodeled to reflect the Art Deco design so popular during that time. The spectacular new Theatre had improvements that were truly unique, such as a steel skeleton for improved stability and safety. The fireproof walls and sprinkler system ensured that no fire would last long. New air conditioning and heating systems were installed in the Theatre to make it more comfortable for larger audiences. New restrooms and dressing rooms had a modernistic design. Red and blue uniformed employees at the “Candy Bar” sold candy and popcorn from the new popper while an array of bright neon lights surrounded the Theatre, bathing it in colorful beauty. The size of the stage was expanded to make it larger than ever before. The new Canton Theatre was indeed a splendid site at the Grand Opening, which took place on September 30, 1940.

The Canton Theatre played the best motion pictures of the time. It was described as a “thoroughly modern sound and movie palace, with all the comfort, light and cheer that denotes a first class picture theatre housed in the larger cities”.

The Theatre continued to show movies for 30 more years, but by the mid 1970’s, the popularity of the Theatre declined dramatically. Many guests felt that it had become too out of date. They wanted to see movies with the convenience of drive-ins and with many more choices. As a result, the Theatre sat idle for many years and subsequently went into disrepair.

In 1994, the theatre was purchased by an individual for restoration. The City
of Canton then acquired the property in a land swap in 1997. It was later deeded it to the Downtown Development Authority in order to secure financing for restoration, which soon began. The Canton Theatre was restored to the Art Deco style of the 1930’s and was reopened in a Dedication Ceremony, taking place on May 26, 2000. Since that time, the Canton Theatre has become a community fixture, providing guests the opportunity to enjoy live theatre from both local and traveling productions, as well as entertainment from musicians, comedians and film screening events.

Get all latest content delivered to your email a few times a month.
Canton Has Fun
×
×